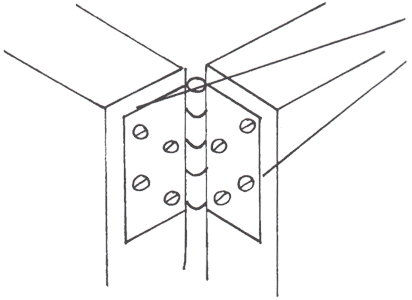 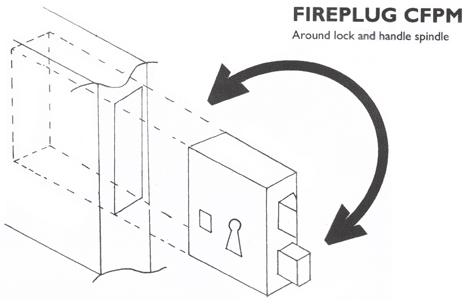 Fireplug CFPM can also be used between the door and a surface mounted lock e.g. Rim latch lock.

Under the action of heat, the Fireplug CFPM insulates the areas around the hinges and lock slowing the passage of heat through the metal. This principal is also relevant when installed with other ironmongery such as, lock striker plate, door closers and pivot plates on double swing doors.

Cut Fireplug CFPM to fit tightly into recess notched out of the door and door frame. With the CFPM only 0.5mm thick an existing recess will probably be deep enough to avoid any further notching out.

Remove the mortice lock from the door. Some shaving of the door may be required to refit the lock. The Fireplug CFPM can be either wrapped around the lock or positioned inside the door. Enough room should be allowed not to tear the paper.

Remove the lock and cut Fireplug CFPM to the contours of the lock. Refit the lock sandwiching the CFPM between the door and the lock.
In all cases handle spindles, or lock barrels, passing through the door should be wrapped in CFPM. Door closers, striker plates and pivot plates on double swing doors should also have Fireplug CFPM fitted

Get a Quote For Your Project